Business and community leaders of Southwest Michigan celebrated extensive business growth in 2018 at the Business Recognition Breakfast, held on Thursday, February 14, at Lake Michigan College, Benton Harbor. The event is hosted annually by the Cornerstone Chamber of Commerce and the Cornerstone Alliance, Berrien County's lead economic development agency. It recognizes business leaders and entrepreneurs who drive the area’s economic engine. This year's event recognized three Kruggel Lawton KLients with awards - Red Rabbit Automation, Competitive Edge, and Anna Murphy - President of the United Way of Southwest Michigan. Congrats to all of the nominees and award winners! 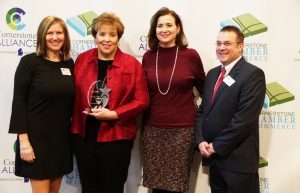 Competitive Edge, a full-service promotional products company focusing on branded merchandise and web-based company e-stores, has been working with customers across the globe for 25 years. The company was founded by CEO Mary Jo Tomasini in 1993. Her sister  Paula Wygonik joined the company in 2004 and currently serves as president. Together with their team, they have grown Competitive Edge from a basement office of one employee to its headquarters in Stevensville, and most recently extending their reach with the opening of a second location in Denver, Colorado. The promotional products company now employs a staff of 22 and is consistently ranked among the top 1-percent of more than 20,000 promotional products distributors nationwide.

The women-owned business has been recognized by its peers and colleagues and has received many awards ranging from “Best Places to Work” to “Top 50 Women Owned Businesses in Michigan.” The company has also received several Platinum, Gold and Silver awards from Cornerstone Chamber throughout the years. 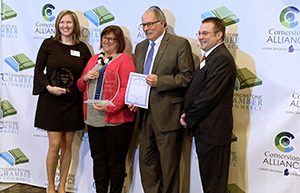 Anna Murphy has been with United Way of Southwest Michigan for 20 years, becoming president in 2005. Prior to her role as president she was vice president of operations, beginning her career with United Way as director of First Call for Help.

As President of United Way, Murphy has led her team and board though a transformation of a traditional United Way to one that creates measurable results and impact in the communities it serves. UWSM has consistently grown the dollars raised, volunteers engaged, and people served. In her tenure, Murphy has merged two other United Ways into the work of UWSM, expanding resources for those communities. The organization was selected as a Best & Brightest in Wellness in 2017 & 2018

Murphy has served on various local boards and is currently an executive member of Michigan’s Great Southwest Leadership Council. She has been on the Michigan Association for United Way’s Board and recently stepped into the role of Board Chair. Murphy is a past recipient of the YWCA's Tribute to Women in Leadership award, the Star Power award through the Michigan Governor’s office and Early Childhood Investment Corporation, as well as 100 Women Strong’s Leader of Distinction.