A friendly competition among members of the Goshen Noon Kiwanis Club has resulted in 225 food boxes being contributed to the Salvation Army of Goshen.

For many years, the club has collected cash and food items for food boxes which supply a week of food to a needy family. Club members gathered cash and items to provide 60 boxes this year, according to Mitch Day, project organizer.

In the spirit of the season, a second challenge was issued by Kiwanis member Denise Davis, partner with Goshen law firm Yoder, Ainlay, Ulmer & Buckingham. She challenged Goshen Kiwanis Club President Mike Varner, a partner in Kruggel Lawton’s Elkhart office, to see which firm could generate the most food boxes.

Final results of the challenge were announced at the club’s weekly meeting on Tuesday, December 12. Yoder, Ainlay, Ulmer & Buckingham’s cash and food donations totaled 65 boxes. If you’re following along and doing the math, that meant Kruggel Lawton’s team won the competition with 100 boxes! Varner accepted a traveling trophy on the firm’s behalf and confirmed Kruggel Lawton will happily defend its title in 2018.

“What a blessing to the needy families in our community. Thank you to all who participated,” said Day. 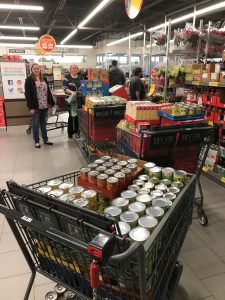 Kruggel Lawton team members at the store buying food for their boxes. 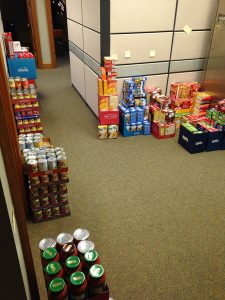 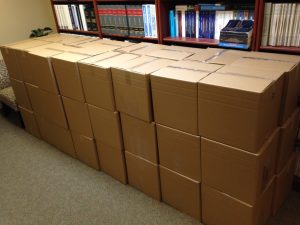 The start of our impressive collection of food boxes for the Salvation Army. 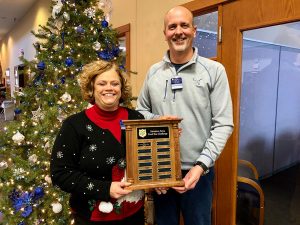