On Tuesday, February 21, 2017, the business community of northern Indiana gathered for the South Bend Regional Chamber of Commerce's Salute to Business luncheon held at the Century Center in South Bend. This annual event recognizes and celebrates the accomplishments of individuals and organizations in St. Joseph County. Kruggel Lawton is proud to be a part of the event each year as the sponsor of the Small Business of the Year Award. This year, two Kruggel Lawton "KLients" were recognized with awards.

The Economic Impact Award recognizes a company's strategic vision and its sustainable capital investment in the St. Joseph County economy.

Four years ago, General Stamping & Metalworks (GSM) made the decision to invest $22.7 million to build a new state-of-the-industry advanced manufacturing plant. Largely completed in late 2016, the 190,000-square-foot building, located at 25101 Cleveland Road in South Bend, is designed to foster learning, collaboration and efficiency. More importantly, the plant reflects a culture that is rarely seen in a manufacturing environment.

The company used mathematical models to simulate the process flows of different production processes to determine the optimal plant design. The improved flow ensures machines don't wait for materials, and material movement teams won't lose time getting raw materials to the machines and parts to the loading dock due to crowded aisles.

Centrally located administrative functions integrate with production, creating the opportunity for better face-to-face communication and access. All employees come to work through the same door; reinforcing the company's commitment to a true team-based culture, where people really want to work and develop a career. The company has a strong orientation toward training and education, offering tuition assistance for approved programs. The company also provides substantial assistance toward uniforms and boots for the production team to keep safe and comfortable on the job.

John Axelberg serves as the company's president and CEO. It was founded by his grandfather in 1922. GSM started out as an industrial sheet metal contractor working mostly with Studebaker; however, those days are long gone. The company's primary business today is metal stamping, metal forming and fabrication focused on "best-in-class" original equipment manufacturers, supporting them through the life cycle of their products.

Customers include manufacturers in the agriculture, lawn and garden, automotive, construction, military and solar power industries. Its incursion into the utility-scale solar power industry is driving current high-volume growth. GSM employs 190 people in South Bend and 47 at its plant in Tomah, Wisconsin, and is currently hiring.

GSM consistently places in the top 10 of the FAB 40, a ranking of the largest U.S. fabricators published annually in The Fabricator magazine. They have been a Kruggel Lawton "KLient" since 1958 and we are proud to serve as a partner in the great work they are doing. 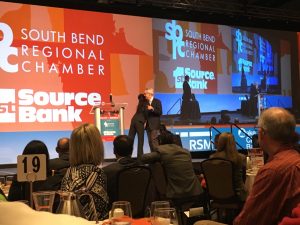 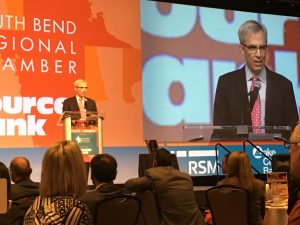 KINETIC IT Solutions - Small Business of the Year

It was fitting that KINETIC IT Solutions was the recipient of this Kruggel Lawton-sponsored award. Our firm was KINETIC's first client and, in turn, they have been a "KLient" of ours since 2012. It has been a privilege to be a part of their growth over the years.

The Small Business of the Year award is presented to a small business that demonstrates leadership, innovation, economic growth and capital investment.

Over seven years ago, Jim Peterson started KINETIC IT Solutions as the United States was in the midst of a historic recession, South Bend was in the process of being named a dying city and unemployment levels were frightening. Jim founded KINETIC with a vision for an entity that wouldn't just be a company but an exceptional member of the community, contributing to the area economically but also socially.

While KINETIC's goal has never been to be the largest IT company in town, its goal has always been to positively impact the surrounding community. KINETIC sees this impact coming in  several ways and has always sought to provide great solutions-to be great at what it does and, in doing so, to help other local businesses be great at what they do.

A managed service provider whose clientele are small-to-medium-sized non- and for-profit enterprises in the South Bend region, KINETIC believes IT can and should be a competitive advantage that adds fuel to an organization's goals versus dragging it down. KINETIC is unique in that it provides services for every level of an organization's IT needs, from 24/7 IT support and simple solutions for basic IT needs to internet access and data transport. It could even take on the role of an organization's CIO by providing strategic consultation and technology planning.

KINETIC has grown in parallel with South Bend's growing notoriety as a hub of technology, innovation and infrastructure (dark fiber) in the Midwest. It has successfully contributed both intellectual and human capital to this initiative by adding an average of three jobs for the past three years.

The company has seen continued financial growth with profits increasing by 8 percent in 2014, 9 percent in 2015, and 23 percent in 2016. Its sales volume has also increased by 50 percent in the last three years with 2016 reaching $3.16 million.

As KINETIC continues to grow, the strong push to follow a standard path that focuses on profits and growth has, at times, stood at odds with its culture and commitment to truly support its clients. Whenever these situations arise, the response is simple: tell the truth, stand behind KINETIC's decisions, and be a true advocate for the client, for better or worse.

At the close of his award acceptance speech, Jim Peterson presented an opportunity to the crowd of 800-plus people gathered in the room. For each person who came up to a KINETIC team member and said "KINETIC Rocks!" after the luncheon, KINETIC would donate 10 meals to the Food Bank of Northern Indiana. On behalf of our 85 team members at Kruggel Lawton, we say "KINETIC ROCKS!" 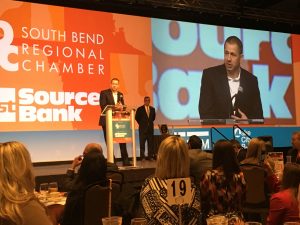 Jim Peterson accepting the Small Business of the Year Award 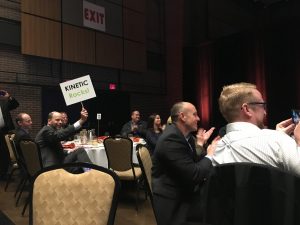 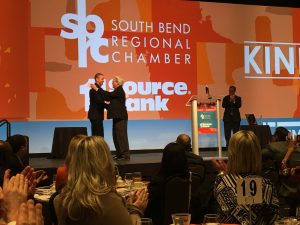 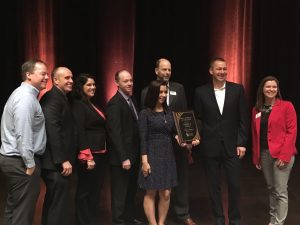 The KINETIC IT Team