Kruggel Lawton conducts this confidential survey of chief financial officers (CFOs) in for-profit companies in the Michiana region on a quarterly basis. The survey tracks changes in companies’ revenue, profitability, and employment levels compared to the same quarter during the prior year, along with CFOs’ perception of the business outlook for their companies. Survey respondents’ input on these four metrics is combined into the BBI to provide a barometer of the Michiana-area business climate.

CFOs from 52 Michiana-area companies participated in the second quarter survey. Compared to the prior quarter’s survey, all but one of the four survey metrics increased. Revenue, profitability, and CFO outlook increased, with the profitability metric jumping 12.5 percent. Employment was the only metric which decreased this quarter, by 3.6 percent. The second quarter results mark the second straight quarterly increase in the BBI from the lowest-ever score in the fourth quarter of 2015. This quarter’s overall Index also exactly matches the overall score in the first survey done by Kruggel Lawton over five years ago.

“It’s a positive sign for the BBI to increase again in the second quarter of 2016, particularly after the lowest score at the end of 2015 since launching this survey in 2010,” said Terry Bush, a director at Kruggel Lawton. “The healthy increase in profitability could give companies more wherewithal to invest in people, equipment, technology, and equipment. Hopefully this indication of a positive first half of 2016 will carry through the remainder of this year.”

If you are a CFO in a Michiana area for-profit business and would like to participate in this survey and receive results, please contact Terry Bush at tbush@klcpas.com or call 574-289-4011. 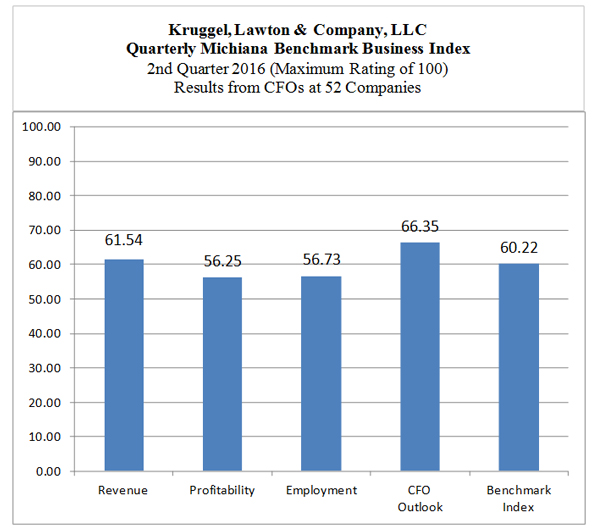 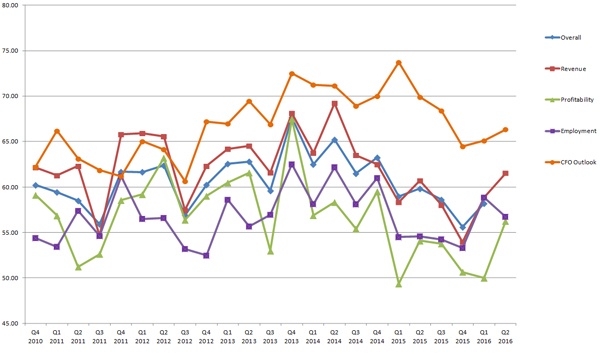